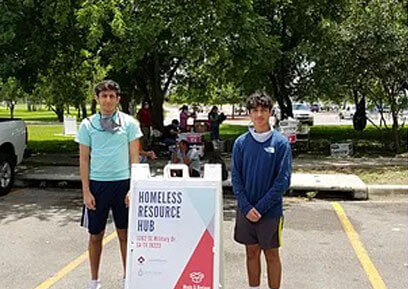 Dream Donations is a 501(c)3 non-profit organization that feeds the homeless. I started the concept of Dream Donations in June of 2019. When I was going to an event downtown San Antonio, I saw a homeless man on the road. All I had was a banana in the car, so that’s what I gave him. I realized that millions of people worldwide sleep hungry every night, and I wanted to do something about it.

I looked out how others have fed the homeless. I was impressed by my uncle’s model in India. He was taking excess food from catering places and restaurants and serving it to India’s slums providing over half a million people. I thought this would be a great idea, especially understanding that there are trillions of food waste worldwide. I wanted to see how the process flows, so I went to India and saw it first hand in the summer of 2019.

I tried to replicate what my uncle was doing there to the best of my ability, but it was somewhat tricky due to food regulation laws in the United States. I talked to the owner of some Subway locations here in San Antonio, Texas, about the food waste that occurs in Subway. I asked him if we could take the excess food, which was bread and sauce, and take it to the homeless. We agreed and began donating loaves of bread with relish to a homeless shelter known as the San Antonio Rescue Mission. Dream Donations served over 300 loaves of bread in 2019.

I modified our model to pay restaurants to produce meals for the homeless to continue feeding the homeless and help restaurants recover from the economic decline COVID-19 had brought to them. I created a website to advertise the restaurants to incentivize them further to work with us. Additionally, the website allows people to donate to the cause, so we can continue to pay the restaurants and get meals for the homeless. I also formed a non-profit organization known as Dream Donations to legalize our efforts with Mr. Craig Hopkins, CIO of San Antonio, Mr. Rickey Burks, former CTO/CIO of USAA, Mr. Nitesh Jain, CEO of Quacito, and Mr. Rajat Khater, Executive Vice President of Zivanta Analytics as our board members.

We have been serving food to the homeless in San Antonio, Austin, and Dallas. We have served over 2600 meals and raised over $4300 in our new model’s first few months. Dream Donations has also been featured on many news coverages, including FOX News 29, KSAT 12, and SA Report. We look to continue expanding our concept across the globe to ensure that no one sleeps hungry worldwide.